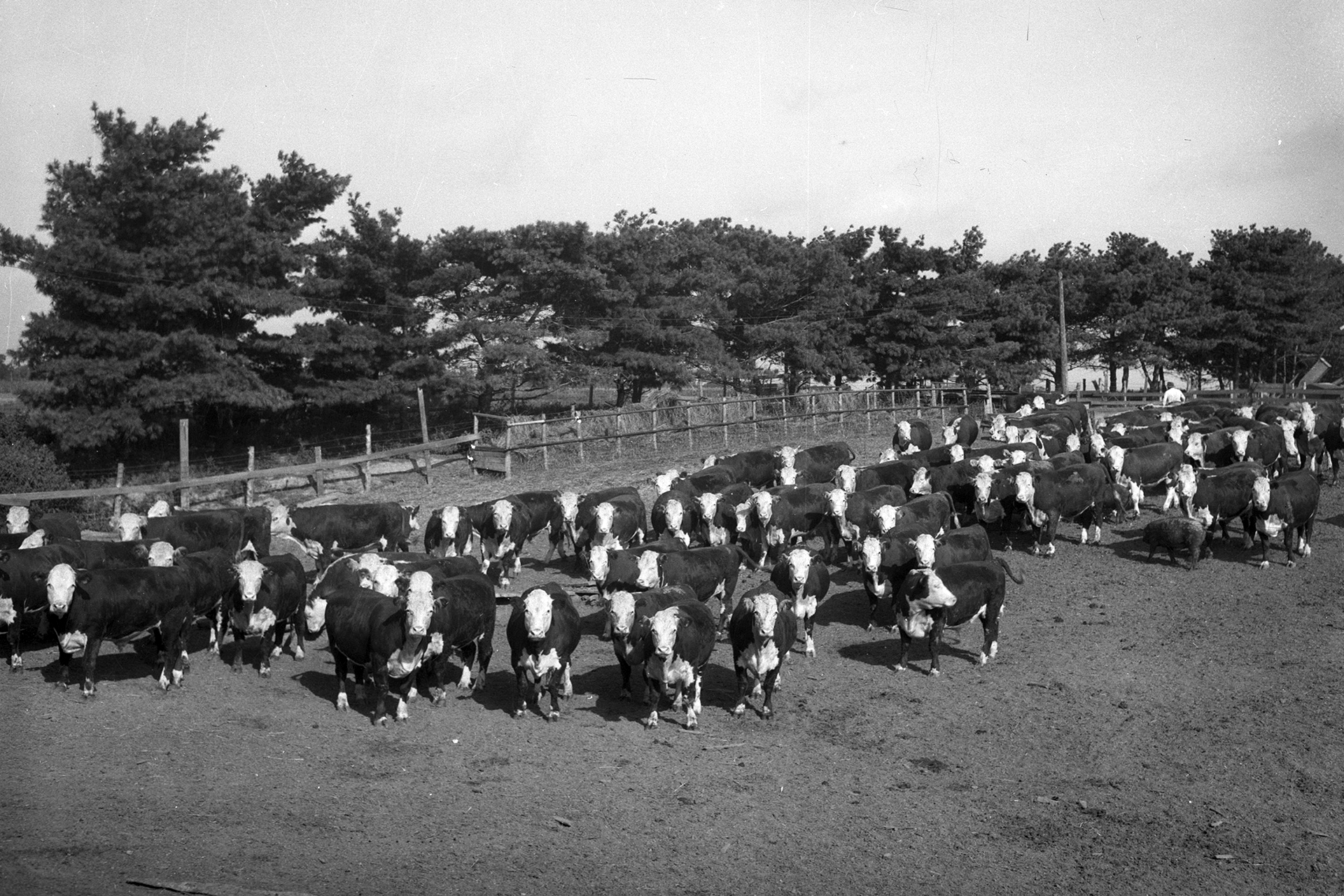 The Last Cattle Drive in Arlington

In the early summer of 1951, I was talking to Mr. George Luttrell, a friend of our family and a prominent citizen and grocer. He said he had fifty-one cows in a pasture across the road from the site where General Motors was going to build an assembly plant. He needed to move them, and I told him that I would be glad to help him and I would borrow my Dad’s horse to use in the drive.

We met the next morning about ten o’clock at the pasture on East Abram Street. There was Mr. Luttrell; his son Ray, who had his horse; and a Mr. Walker. Also there, in a car, was Mildred Luttrell, the wife of Mr. Luttrell’s son James, and their six-year old son George, and his cousin Andrea of about the same age. Mildred was going to follow along the rear of the herd.

We moved the herd out into Abram Street and turned them east. Ray Luttrell was up near the head of the herd. Mr. Luttrell and Mr. Walker were walking on either side and I was riding at the back to keep the cattle moving.

In those days there was very little traffic on any roads around Arlington. We drove the cows to Pantego Road, which is now known as Park Row, and turned them west. We kept the herd heading west, crossing Collins Street and there was hardly any traffic on any of our roads.

Just before we came to Center Street, a man by the name of Brasher was building houses on both sides of Pantego Road at the intersection of Center Street. When we passed there we were careful to keep the cattle from getting into the yards. By the time we got to Pecan Street, we did not have to worry about getting into any yards.

We continued west, crossing Cooper Street, which was just a country road (FM 157). We kept making our way west, passing Dean Davis’ house, which was set back from the road in his pecan orchard. Across from his place was the college farm, on which now is the college baseball stadium.

At this point, we reached Henry Road, which is now known as Fielder Road. Henry Road was named after the Pastor of the First Christian Church, who lived on that road.

At this intersection, we turned the herd south to where there is now a fire station, at Berry Road. At this point, we headed the cattle west along a road that is now Tucker Street. We continued west to where a creek crossed the road about a block from Bowen Road.

At this point, we turned the herd into a pasture, which now has a housing addition which has canals. This pasture contained all of the land including the campus of Bailey Junior High School. We got the herd into the pasture without any real problems.

The children, George and Andrea, seemed to enjoy the whole thing. I do not know about Mildred. She had to follow us slowly and I think her car overheated.

The whole drive was approximately six and a half miles and it was late afternoon when we finished. We did not know it at the time, but it was the last cattle drive in Arlington.